Prophecy of the Black Seeds

Prophet Mohammad was quoted as saying, "There is healing in Black Seed for all diseases except death." It is also believed that honey was part of the blessed seed treatment. It was part of the tradition to put some honey and ground whole black seeds in the palm of your right hand and lick it up with your tongue. In the days of Prophet Mohammad there was no black seed oil.

Black seed oil was found in the tomb of King Tut proving that the important kings found value in this seed. It was a sign also that of all the gold and diamonds he possessed, black seed oil was part of what he chose to take to the next life. The black seeds were found in his tomb also.

To understand the history of Nigella sativa you need to know more of what has happened in the past.  Black seeds can be traced back to over 4000 years.

Black seed has been used extensively as an herbal remedy and as a food condiment for thousands of years. It has an abundance of names and is most commonly referred to as black seed or black cumin seed in Western countries.

Mentioned in the Bible

Recommended by the Prophet Muhammad (Peace be Upon Him)

Prophet Mohammad (peace be upon him) stated, "Hold on to the use of the black seed for indeed it has a remedy for every disease except death." "Hold on," indicates that one should take the remedy daily and take it often and regularly.

An Assyrian herbal book explains black cumin seed as a remedy internally for stomach problems and externally for ears, eyes, mouth and many skin problems, such as itching, rashes and sores. Nigella sativa was also used for herpes.

The black cumin oil and seeds were found in King Tut's tomb proving how valuable it was.  The honey and seeds were also found in the tomb indicating that this was a prescribed way he took this miraculous medicine.  Cleopatra was also known to use the oil for her beauty and her health.  Queen Nefertiti who was admired for her beauty, also used the black seed oil.  Doctors and the Pharaohs used the black seed oil and the seeds to treat people with such ailments as: colds, headaches, digestive problems and allergies.

Used by all Naturopathic Masters

The blessed seed Nigella sativa was also used by Hippocrates in the 5th century B.C.  He claimed that Nigella sativa was a valuable remedy in hepatic and digestive disorders. Pliny, the elder, used the seeds in the first century extensively and wrote in his "Naturalis Historia" (Natural History) about Nigella sativa and referred to it as “Git”.

Pliny used its remedy for scorpion stings and snake bites, callosities, tumors, abscesses and skin rashes (eczema).  Due to its anti-inflammatory qualities, the seeds were used for head injuries.

Greek physician Dioscorides used the blessed seeds for a variety of ailments to include: intestinal worms, headaches, toothaches and nasal congestion.  The seeds were also used as a diuretic, to increase milk production and to promote menstruation in women.

Black cumin or Nigella sativa was appreciated for its many qualities and bitter, warming stimulant nature. In tradition and typology of the 3 doshas, black cumin reduces veta and kapha and increases pitta.
Black cumin was used for a wide variety of complaints, such as anorexia, certain disorders of the nervous system, discharge and venereal disease.

The oil was used traditionally as others did, but now it was being used on dogs, cats and horses.
Online Courses for Nigella Sativa: Benefits

The world is simply astonished of the many benefits of Nigella sativa and the desire to find the best product grows.  There are many other benefits of black cumin, such as:
One of the best benefits of black cumin is the ability to increase immunity.  If you feel tired and lethargic and want to find a quick fix, then try this very simple recipe.  Take 1 teaspoon of black cumin oil and mix it with the juice of one orange.  Drink this mixture 1/2 hour before breakfast and you will see your energy level return.  I suggest you do this each morning to improve you immune system and find increased health.  For something that is one step above this simple recipe, why not try my honey and black cumin elixir.

Put the honey in a large bowl.  If you do not have royal honey, you can use all regular RAW honey.  Add in our black cumin oil and ginger and mix well.  Add in the chopped nuts and stir.  Pour the honey mixture into a large jar and seal.  Eat 1 teaspoon of this honey mixture daily.  You can eat this any time of the day. 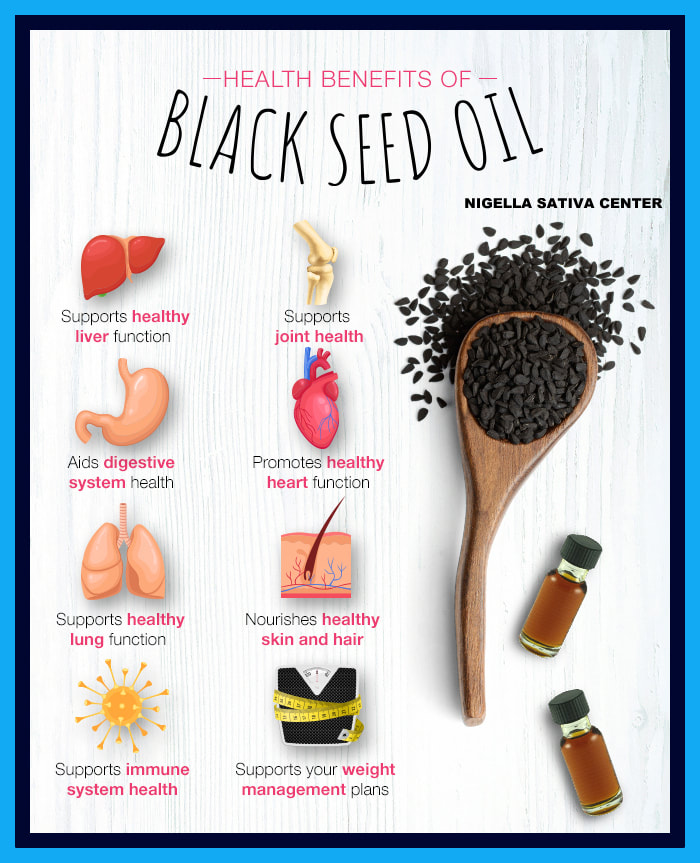 Some of the nutrients found in Nigella sativa are:
Vitamins

Nigella sativa is rich in unsaturated fatty acids. These fatty acids are used to help lower cholesterol levels and the risk of heart disease. N. sativa is especially high in Oleic and Linolenic acids, both of which are important fatty acids. This oil contains less than 10% saturated oil, but an abundance of unsaturated Omega 6 and Omega 9.

In spite of black cumin's use over the centuries, it is considered one of the newer sources of cooking oils. It is high in essential nutrients needed to generate energy in the body, as well as to maintain strong organs and tissues. [4]

Plant sterols are becoming an area of focus for their ability to lower bad cholesterol and aid in the prevention of heart disease. Sterols are also important to the building and maintenance of many cell functions and membranes and the absorption of vitamins and other nutrients.

N. sativa contains several key phytosterols, including β-Sitosterol, Stigmasterol, and Campesterol. The cholesterol-lowering properties of these sterols are well known and accepted by scientists and nutritionists. When these naturally occurring plant phytosterols enter the bloodstream they compete with the body’s existing cholesterol, blocking absorption and thereby lowering cholesterol levels. [5]

Black cumin contains phytonutrients [6] such as tannin, carotenoids, saponin, and alkaloid. These components make it anti-bacterial, analgesic, antiviral, and antipyretic. Its unique combination of compounds also makes it effective against parasites and worms. In the digestive tract, it inhibits the growth of E. coli and Bacillus subtilis. The herb’s compounds are also effective for fighting against the bacteria streptococcus feacalis.
THIS ARTICLE MAY CONTAIN AFFILIATE LINKS THAT I HAVE CHOSEN FOR YOUR ENJOYMENT.  YOU CAN READ MY PRIVATE POLICY AND AFFILIATE LISTING HERE.