ANOTHER REASON TO USE SAFFRON BLACK SEED OIL

Saffron contains a large number of antioxidants and flavonoids. These help to safeguard the body from harmful materials and diseases. A lot of studies show that saffron is an effective treatment for learning disability and memory disorders. One of these researches found that taking saffron every day enhances the symptoms of Alzheimer’s disease.[11]

Compounds in saffron, crocin and ethanolic treat symptoms of depression in rodents. Taking saffron milk can also minimize specific toxic effects in the nerve cells. Extracts of saffron boost the generation of essential neurotransmitters such as dopamine and glutamate [12]. Studies as well show that saffron can prevent cerebral ischemia or insufficient blood supply to the brain [13]. The cognitive enhancing effects of saffron is due to its high antioxidant properties [14].

Saffron enhances the levels of proteins like BDNF, VEGF, and phosphorylated CREB  required for brain development, healthy brain function and ensures sufficient blood flow to the brain [15]. Saffron also restrains the effects of the acetylcholinesterase enzyme which causes high levels of acetylcholine in the blood [16].

The majority of these health benefits of saffron comes from its active compound, crocin which is better absorbed by the body in the form of crocetin [17] Many human and animal studies show that saffron can boost brain health in some ways including; minimizing inflammation, apoptosis prevention or prevention if brain cell death and controlling neurotransmitters level through its antioxidant properties [18].

READ MY FULL ARTICLE ON MY NIGELLA--SATIVA SITE
SAFFRON NOTES AND REQUIREMENTS;

USE ONLY THE BEST SAFFRON - IRAN, AFGHANISTAN, KASHMIRE, SPAIN
USE HONEY OF YOUR CHOICE - RAW AND ORGANIC
​
SAFFRON MUST BE GROUND - I DID 2 PULSES IN MY COFFEE GRINDER
MIX THOROUGHLY EACH TIME BEFORE USE

YOU MUST TAKE THE FIRST DOSE IMMEDIATELY AFTER THE ONSET OF THE STROKE (BEFORE 24 HOURS) AND TWICE A DAY AFTERWARDS DURING TREATMENT PHASE.

SUGGESTED DOSE IS 200MG DAILY OR 1/2 TABLESPOON AS PER PHOTO ABOVE.

CAPSULES SHOULD ONLY BE USED WHEN NO OTHER INGREDIENTS ARE ADDED AND ARE FROM THE HIGH RANKING COUNTRIES.

IF TAKING SAFFRON THREADS NOT IN HONEY, MAKE SURE THE SAFFRON IS GROUND OR PULSED OR IN TEA.

​DOSAGE SHOULD BE FOR 1 MONTH TO 3 MONTHS.

THIS SAFFRON PROTOCOL TO BE USED IN CONJUNCTION WITH MY REGULAR CAYENNE, BLACK SEED OIL AND MAGNESIUM TREATMENT. 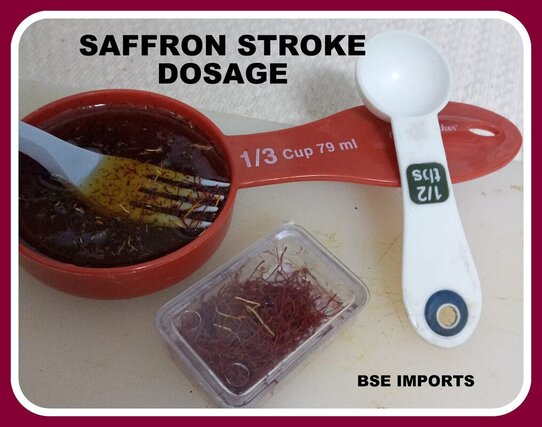 Saffron is a valuable dietary spice derived from the flowers of Crocus sativus (Iridaceae). Saffron has been known since a long time as an herbal medicine [18, 19]. Saffron is now likely to be such an agent that has aroused physicians’ interest [20]. At present, modern pharmacological investigations have demonstrated that saffron and its ingredients have a lot of therapeutic effects such as anticancer [21], antimicrobial [22], antineuropathic pain [23], hypolipidemic [24], antidiabetic [25], antianxiety [26], antitussive [27], antiobesity [28], antitremor [29], hypotensive [30], anticonvulsant [31], antidepressant [32], and antiarthritis effects [33]. Also, gastric ulcer healing [34], memory improvement [35], and management of metabolic syndrome [36] have been reported for this medicinal plant.
Saffron effectively reduced the levels of IL-6 and IL-1βand expressions of glial ﬁbrillary acidic protein (GFAP), neurocan, and phosphocan, quantiﬁed by ELISA and Western blot, respectively. It also reduced neurological problems and spontaneous move-ments as well as anxiety-like behaviors and cognitive im-pairment, examined by elevated plus maze (EPM), marble burying test (MBT), and novel object recognition test (NORT). Besides, saﬀron showed anticerebral ischemia properties by reducing the infarct volume and glial scar formation [20].  SOURCE